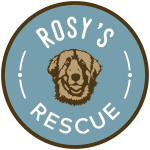 Meet the Dogs and Puppies for Adoption 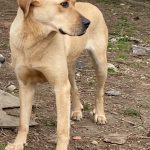 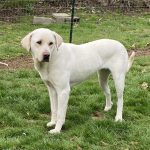 Mocha and her sister Fairy Girl were raised on a farm in TN, and have been living together since they were born.  Their mother was supposedly a Great Pyrenees,  their Papa an Australian Shepherd, but they look like Labrador Retrievers so that’s why we listed them as that.

They are SO EASY GOING and have such docile temperaments. They are young adult dogs, somewhere between 18 months & 2 yrs old.  They were surrendered by their owner who said they chased their livestock.  They were well taken care of, they love each other dearly – a true bonded pair, therefore, we are going to find an owner who will adopt both of them.

They are heart-worm negative, spayed and UTD on vaccines. They are house trained and are currently being fostered at a home in CT.  They are exquisite! 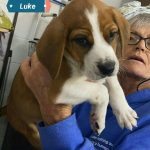 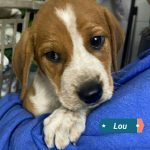 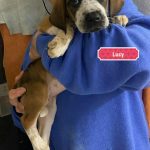 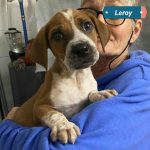 The “L” Puppies have ALL BEEN ADOPTED!!

Adopted: “Leroy” is from TN and is one of 6 – 5 of them are boys. He is a cutie-pie. She is a mix of a Beagle and Tree Walking Coonhound.

ADOPTED: “Lou” is from TN and is one of 6 in his litter – 5 of them are boys.  He is adorable. She is a mix of a Beagle and Tree Walking Coonhound.

ADOPTED: “Lucy” is one of 6 in her litter, and she is the only girl. She is a mix of a Beagle and Tree Walking Coonhound.

ADOPTED: “Luke” is from TN and is one of 6 in his litter – 5 are boys.  He is adorable. He is a mix of a Beagle and Tree Walking Coonhound. 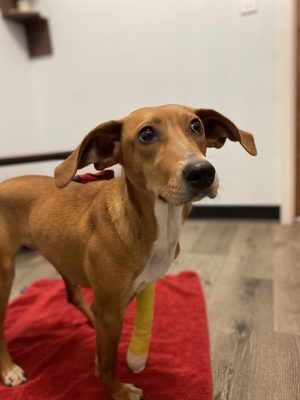 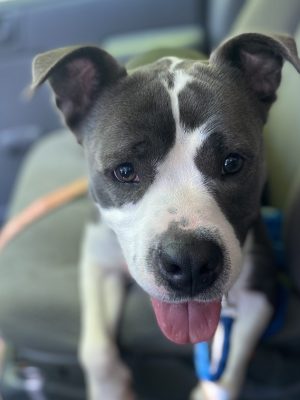 Kobe is so darn CUTE and is our Pride and Joy! We have been working with him and a trainer for a few months now, helping him become his best self. He is a pandemic puppy that was neglected. His first 2 yrs were spent in a Bronx apartment, where he wasn’t cared for properly…in a nutshell….he was ignored. He was left in a crate for long hours, subjected to sitting in his urine and feces causing burns to his skin from the acidity of the urine. It’s possible that a male teenager in the house, at-the-least, teased him mercilessly, but more than likely – abused him.
He was surrendered by his original family and was fostered by someone who took him in. Rosy’s Rescue took over for the foster and we now have him with our other rescues.  He is doing quite well,  learning how to be a good pet companion.

His prospective new owner must have Bully Breed experience, with an understanding that this breed can be mouthy. We believe the best scenario for Kobe is to be adopted to a household w/o children, and if there is another dog in the home, female would be best. He is fine with cats…actually really likes them. He has gotten along with male & female dogs, but he seems best with females. He likes to play, and if the other dog doesn’t want to play with him, he will bark in their face until they get mad. He’s a true teenager:)
He also prefers human females to human men, but with time, has shown a ton of affection toward a male volunteer that plays with him and shows him kindness. He is an excellent retriever, loves chasing a thrown ball and bringing it back. He will drop-it, sit, and wait for it to be thrown again. He is a very funny dog – it’s as if he’s seeing things for the first time – everyday. He is enamored with grass, rain,  windshield wipers, flies, his tail, and on and on….bumble bees are his favorite. He also LOVES going for hikes in the woods. His love language is HOTDOGS…as he will do pretty much anything for a nibble of a hot dog.

His new owner must be consistent with daily exercise and training, i.e. a few long walks every day. A fenced in yard would be great for Kobe as he’s very comfortable sitting outside watching the world go by.
Kobe is a work in progress and we believe it’s time for him to find his person. He is housebroken and is crate trained. He struggles with resource guarding but he can be distracted which is great. We truly believe that he will be a great companion for someone with the skill, patience and time that Kobe so deserves. His adoption fee of $250.00 which will go directly to a dog trainer for the new owner to use.

If interested in adopting Kobe, you can meet him at our next adoption event this Sunday, 7/31/22 at Roosevelt Vet Center in Brewster, NY., from 11am – 2pm. Reservations are required and can be made by calling/texting (914) 483-0004, or emailing wmartin@rosysrescue.com

Thank you for your interest in adopting from Rosy’s Rescue. “Rescued” is truly our favorite breed. 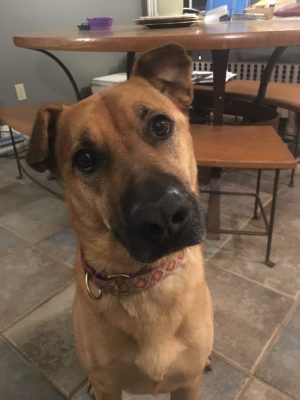 I am a 2 yr old SF Mix of possibly – Black Mouth Cur – German Shepherd – Shibu Inu, originally from the Ozarks. I am very sweet and I love to spend the majority of my time outside during the day. It will take me a little bit of time to warm up to my new human(s).  I’m a little nervous when meeting new folks (I shake & shiver) but it doesn’t last long.  I just need some extra pets and extra reassurance that everything’s gonna be alright.  I LOVE TO SNUGGLE.  I am Heart-worm negative and UTD on vaccines. I really want to be settled into a loving home for the long haul. I still like to play with other dogs, but I think I just want to be the only dog in the house.  I get along with others, but I don’t think I want to share the attention with another furry K9.  Felines are fine, I like them and they don’t take the attention away from me so we’re all good on the cat front.

Please consider me, I’m house trained, I love my crate, I’m a good eater, I’m great on a leash, I love to play with toys and I must have a fenced in yard to hang out in because I LOVE the outdoors.  I would really like an athletic person to go running or mountain biking with! 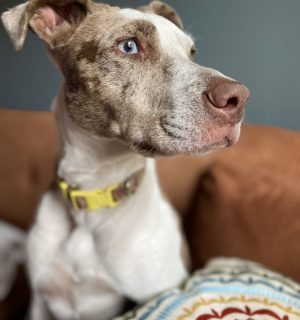 I come from the school of hard knocks and have learned a lot along the way. My name is Stella, I’m 18 months old and I’m trying to make the best of my situation.  I was part of a gigantic litter, and a body part of mine wasn’t fully formed, so the doc made one for me.  It’s too embarrassing to put down on paper but if you’re interested in me, I’ll give you the details.  I’m told that I’m very pretty…I have red & white fur and beautiful blue eyes.  Plus, I can jump super high. I’m already spayed & up-to-date on EVERYTHING canine.  My perfect companion would have a quiet household, with or w/o dogs is okay for me, but it takes me some time to adjust to canines, but I love cats!  I need to be with someone who would run or jog with me daily, or take me for hikes in the woods (off leash) so I can release energy, cuz I suffer from anxiety. I’m working on learning how to calm myself…and I’ve already come a long way.  I’m not going to be your easiest dog, but I will be your most loyal, and I will kiss you a lot if you let me.  If you’re interested in learning my entire story, my foster mom has all the information. I really just want someone to be proud of me

Stay Tuned for Our Next Adoption Event

MEET THE PETS OF ROOSEVELT